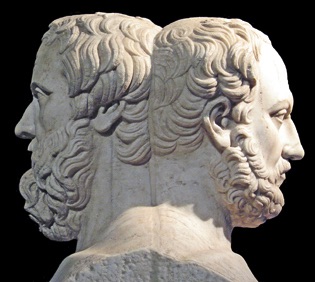 Herodotus explored centuries of contacts between the ancient Greeks and the Persian Empire, culminating in the Persian Wars of the early fifth century BC.

In dramatic land and sea battles, the Greeks managed to repel invaders from the much larger, richer, and more powerful Persian Empire to the east.  Later historians have said these Greek victories saved Western Civiliation.

To compile his history, Herodotus relied on oral accounts and he included gossip, myths, and rumors.  Sometimes he would provide conflicting accounts of events and invite the reader to decide which to believe.

Herodotus wrote, "No one is so foolish as to prefer war to peace: in peace children bury their fathers, while in war fathers bury their children."

Historians are undocumented elsewhere in the world until the first century BC in China.

The dual marble bust of Herodotus and Thucydides was photographed in the summer of 2006 at an exhibit at the Colosseum in Rome. Photo by Mike Maxwell

The Greek writer Thucydides (thoo-SID-uh-dees) is credited with writing the first "scientific" history. Gods and legends played no role in his history of the Peloponnesian War between Athens and Sparta, which took place in the late fifth century BC. After 27 years of conflict, Sparta won, and Athens went into decline.

Thucydides wrote only about events that occurred during his lifetime that he could verify through examination of written records and eyewitness accounts. He strived for complete objectivity, and in this way he pioneered the historical method used by historians today.

Thucydides wrote, "Adverse to taking pains are most men in the search for the truth, and prone are they to turn to what lies readily at hand." He said truth could be distinguished from fiction "only after investigating with the greatest possible accuracy each detail."

He tried not only to recount events, but to make sense of them. Thucydides records one of the figures in his history as observing that men go to war out of "honor, fear, and interest," a formulation not improved upon in subsequent centuries.

He determined that war could be avoided if humans would base their choices on reason rather than force.  According to Thucydides, it was because  Athenians violated this principle that they eventually suffered defeat at the hands of Sparta.

Please excuse the advertising; it helps pay the bills.